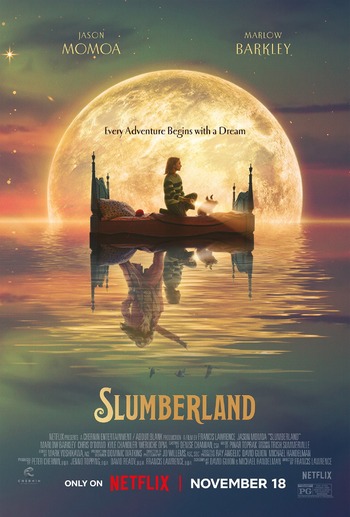 Your dreams are waiting.
"This is the world of dreams. Slumberland. Wish for whatever you want here. Jump from dream to dream to wherever we want to go."
— Flip
Advertisement:

Slumberland is a fantasy adventure film directed by Francis Lawrence (The Hunger Games: Catching Fire, The Hunger Games: Mockingjay) based upon Winsor McCay’s Little Nemo comics. It was released on Netflix on November 18, 2022.

The film follows a young girl called Nemo who finds a map to the magical dream world of Slumberland, and joins forces with a con artist named Flip (Jason Momoa) for a quest to see her late father one last time. India de Beaufort, Weruche Opa, Chris O'Dowd, and Kyle Chandler also star.

"Life is waiting for you, Nemo. You can do anything you dream of."