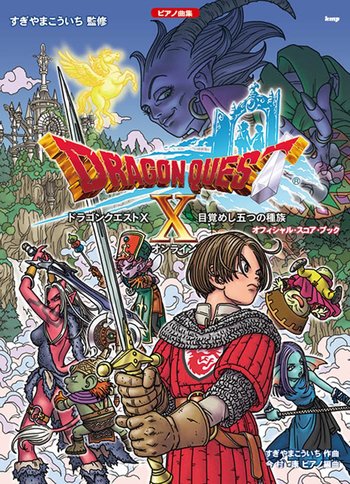 Dragon Quest X: Waking of the Five Tribes (approximate translation), is the tenth installment of the Dragon Quest series, released on multiple platforms over the course of its existence. The game takes place in the world of Astordia, which is the home of five different races of people: Ogres, Wetlings, Elves, Dwarves, and Poppets (Humans are also present, but they're rare).

The game is an MMORPG that features Character Customization and Vocations, similar to Dragon Quest IX. Once you've created your character, you can send them to meet the characters of other players. You can form a party of up to four characters, who can then go together on adventures. One major thing about this game that makes it unique from the others in the series is that the multiplayer is handled online.

This game was released in Japan on August 2, 2012 for the Wii and on March 30, 2013 for the Wii U by Square Enix, with a PC version later released. The game has also received a port in Japan to the Android devices and for the Nintendo 3DS both using streaming technology to enable the games to function and interact with those using the Wii, Wii U, or PC versions. It later gained yet another port for the PlayStation 4 and Nintendo Switch. It is so far the only mainline Dragon Quest title to be unreleased outside of Japan.

The game has received multiple major expansions, which often come with "All In One Package" Compilation Rereleases. The base game is considered Version 1:

An Offline version of the game was announced on May 26, 2021 in celebration of the 35th Anniversary of the overall franchise. It was intended to launch on February 26, 2022 in Japan for the PlayStation 4, PlayStation 5, Nintendo Switch, and PC, but was delayed because of final adjustments, as well as finishing the main Online game's 6.1 update.

The Japanese website for the game can be found here