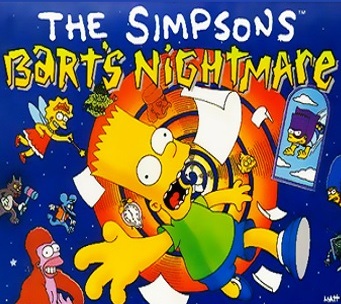 Bart's Nightmare is a videogame based on The Simpsons and was released in 1992 for the Super NES and Sega Genesis by Acclaim. It was developed by Sculptured Software, who also developed the follow-up Virtual Bart.
Advertisement:

The premise is simple: while studying for a test one night, Bart falls asleep and begins to dream. Within the dream, Bart has to evade enemies and collect the missing pages of his homework, so that when he wakes up he can pass the test and get a good grade.

The game drops players into the Hub World "Windy World", where Bart must evade various enemies and collect power-ups while searching for the pages of his homeworld blowing down the street. Bart's health is represented by a bar of Zs along the top of the screen; by blowing a bubblegum bubble into Zs he comes across, he can float them up to the top of the screen and catch them in the Z bar. By jumping into the homework pages when he finds one, Bart enters different worlds to retrieve his homework. The levels are:

The game is notable for its steep difficulty curve, more due to Fake Difficulty than actual difficulty.