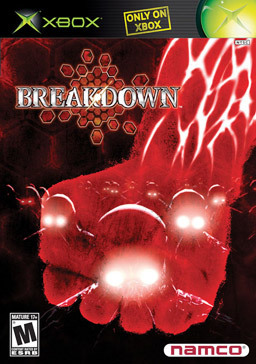 Breakdown is a slightly obscure first-person brawler for the Xbox, released in 2004 by Namco. While it sold poorly and received mixed reviews, it's notable to genre fans and game historians for its high emphasis on using its perspective for storytelling potential. It's also unusual in that it's a first-person shooter made by a Japanese team for the original Xbox, which makes it a complete statistical anomaly. Interestingly, it was included in backward compatibility for both the Xbox 360 and the Xbox One.
Advertisement:

Breakdown is a landmark game in creating what's now generally referred to as "immersion." You never leave your character's perspective, even when eating, drinking, fist-fighting, or throwing up. Later games such as FEAR make frequent use of narrative techniques that first appeared in Breakdown, with the Condemned games in particular feeling vaguely like an unofficial spiritual sequel.

At the start of the game, you take on the role of an amnesiac soldier named Derrick Cole, who's trapped in a lab room being experimented on by unseen scientists. An unseen force attacks the complex surrounding the room, and Derrick is broken free by a woman named Alex. She knows him; he doesn't remember her. Derrick must escape the facility, which is being attacked by a mixed force of human soldiers and an alien race called the T'lan.

Slowly, both Derrick and the player learn that the entire situation was set into motion by the discovery of a mysterious alien civilization under Japan, code-named Site Zero. Derrick is the lone survivor of an experiment with T'langen, a substance recovered from Site Zero, which gives him superhuman strength and speed. Now you're punching out aliens and fighting to prevent an alien takeover of humanity.

Then it gets weird.

Tropes present in Breakdown include