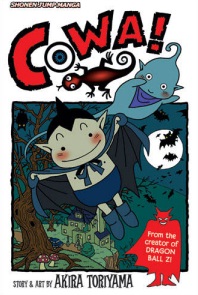 Cowa! is a one-shot manga by Akira Toriyama that ran in Weekly Shonen Jump from 1997 to 1998, a return to more whimsical and funny atmospheres after the end of Dragon Ball. This manga tells the story of a small village inhabited by monsters as well as humans and animals. One day, a mysterious disease starts to spread among the monster population, and it's up to three monster kids (Paifu, Arpon and José) to venture outside and search for the Witch who creates the cure for the disease. However, it is a long and perilous journey, and they ask the help of an extremely strong man, Maruyama Mako, thought to be a killer. The man is not really what he seems...
Advertisement:

Cowa! is a fun little story, reminiscent of Doctor Slump by the same author, but with some elements that recall Dragon Ball (notably, some humorous fight scenes).