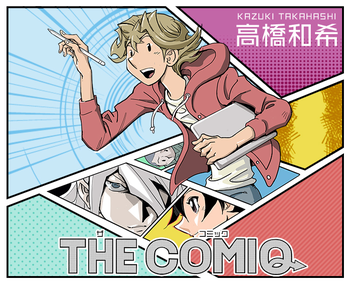 I promise to save you... with the power of manga!

The Comiq is a short-form manga written by Kazuki Takahashi, creator of Yu-Gi-Oh!. The first chapter premiered in the October 2018 issue of Shonen Jump, and the series concluded in November of the same year.

In real life, as well as this story, prison inmates are made to draw manga backgrounds to acclimate into society. Up-and-coming mangaka Ryota Sakamaki is hard at work on a new series, advised by his sister Mihana and taunted by the super-popular mangaka Seiya Himekawa.

Ryota's work begins to reveal unsettling parallels to a murder that took place years earlier—and he learns Baba, the supposed murderer in the case, is drawing his backgrounds. Convinced Baba is innocent based on the drawings, Ryota sets out to prove it with the power of manga.