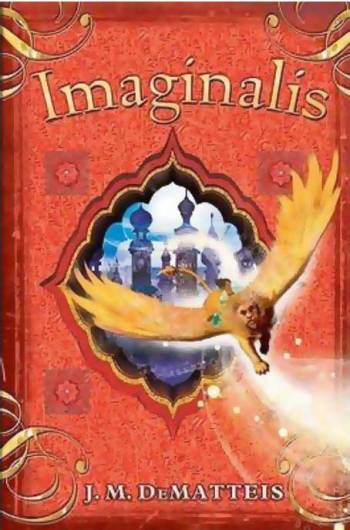 "'In this world,' Prognostica went on, 'we're just a story. But really, the whole universe is just a story, isn't it? Every life is an extraordinary adventure. Some lives just end up between the pages of a book.'"
— Prognostica, Imaginalis
Advertisement:

Imaginalis is a young adult fantasy novel written by author J.M. De Matteis, and serves as something of a Spiritual Successor to Abadazad. The origin of the book is rather interesting: After Abadazad was Screwed by the Network for a second time, De Matteis received an interesting idea; specifically, the idea of book characters being trapped in Limbo. One thing led to another, and Imaginalis was created.

The book centers around a young girl named Mehera, a huge fan of a book series known as Imaginalis, to the point that she writes her in Self Insert Fics and has given many book reports over years on the series (much to the ire of her classmates).

Life isn't that great for Mehera. Her mother is dead, leaving her father alone to raise her, and school doesn't help things. The only place for her to go is into her favorite books so it comes as a huge shock for her when she learns that the Imaginalis series has been cancelled. Mehera doesn't take this well, and does everything she can to save the series, even when no one else seems to care (her friend Celeste tells her to "Get over it").

One day after a small argument with her father, Mehera is contacted by Uncle Nossys, one of the characters in the book. Soon, she finds herself with the heroes of her favorite story, trapped in a dark world known as Nolandia, and slowly fading into nonexistence. Their only hope is to follow Mehera to Earth, track down the series' author, and bring Imaginalis back before all is lost. Unfortunately for them, Pralaya, the books' Big Bad, has other plans...