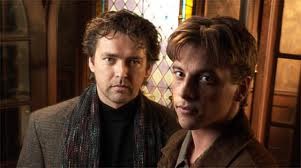 Miracles is an American TV show combining drama, horror, suspense, science fiction, and mystery together. It is directed by Matt Reeves, produced by David Greenwalt, and written by Michael Petroni and Richard Hatem. It stars Skeet Ulrich as Paul Callan and Angus Macfadyen as Alva Keel.

Paul Callan was once an investigator of modern miracles for the Catholic Church. However, after he kept finding mundane explanations for supposedly supernatural phenomena, he began having a crisis of faith. He ends up leaving the church when he experiences a true, supernatural miracle that saves his life...and it gets dismissed due to lack of evidence. Alva Keel comes in and recruits Callan to his Sodalitas Quaerito (Latin for "Brotherhood in Search of Truth") organization. This organization specializes in investigating and cataloguing "unexplainable" phenomena. Joined by their colleague and former police officer Evelyn Santos (Marisa Ramirez), they are trying to stop impending "darkness" before it's too late.

The show debuted in January 2003 on ABC, which canceled the show after airing just six episodes of 13 produced because the 10:00pm time slot was needed for news specials about the Iraq War. The full season later aired on Canadian TV and was eventually released on DVD by Shout! Factory.