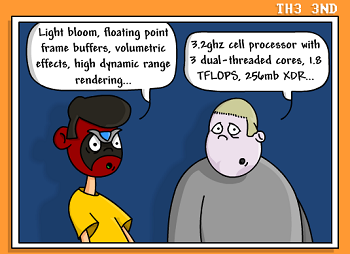 Sender: Gunkiller, Standing Right Behind You

"Gunk-iller" and his friends ask Strong Bad for suggestions on making a web comic, which according to Strong Bad is easy.

After a brief tangent on crummy animated adaptations of video games, Strong Bad concludes that Gunkiller and his friends should not make a web comic.

Strong Bad: Why can't you just make a... comic? Everyone knows that putting 'web' in front of words automatically makes them crappier. Just look what happened to 'pages,' and 'cams,' and 'logs.' And who could forget the fall of the mighty 'isode.' Ohh, so tragic.