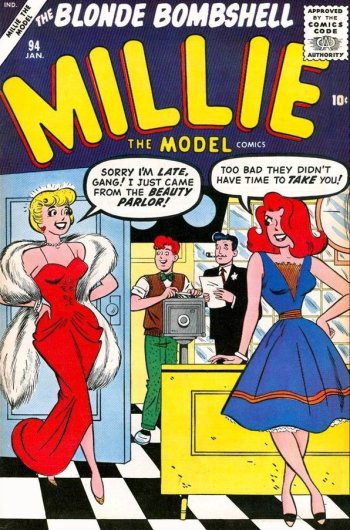 A typical day for a couple of haughty hotties.
Advertisement:

Millie the Model was one of Marvel Comics' longest-running features. It showcased Millie Collins, a young model for the Hanover Agency, along with her best friend, Toni Turner; her photographer and boyfriend, "Clicker" (originally "Flicker"), and her "redheaded rival", Chili Storm. Other characters include Millie's boss, Mr. Hanover; Fat Best Friend Daisy, and Daisy's Jughead-esque boyfriend, Marvin.

Millie appeared in the Millie the Model title as well as several spinoffs, including A Date with Millie, Life with Millie, Mad About Millie and Modelling with Millie, from 1945 to 1973. Chili Storm also had her own title, Chili, from 1969 to 1973.

Originally a humor feature, Millie the Model became a romance-adventure series between 1963 and 1967, before shifting back to humor for the remainder of its run. As a humor feature (and particularly in the 1967-1973 incarnation, which closely mimicked the Archie house style), Millie read something like a slightly more sophisticated Archie Comics title, albeit one about young professionals instead of high-schoolers.

While hardly what one now thinks of as "typical" Marvel Comics, Millie's were quite successful for many years. Many of Millie's writers are better known for other comics. Denny O'Neil, Roy Thomas and Gary Friedrich are among her writers in the "romance-adventure" years. And the writer for the vast majority of her humor stories? None other than Stan Lee himself! Indeed, Stan has often said in interviews that humor writing is his first love, and even as he gradually cut back his direct involvement with Marvel's superhero titles, he kept writing Millie.

Millie herself has interacted with the wider Marvel Universe on occasion. She was on the guest list for the wedding of Reed Richards and Sue Storm, and has occasionally turned up in other Marvel titles over the years. Most recently, Millie was the star of the 2009-2010 miniseries Models, Inc. Rather surprisingly, Chili Storm has also turned up (sans Millie) in several stories in the Marvel Adventures line. In 2011, Millie starred in another miniseries, 15 Love, in which she is recast as a teenage tennis player. In 2015 an alternate-universe Robot Girl version of her appeared in Secret Wars (2015) as "Mill-E the Model Citizen".

She also crossed over with Sherry the Showgirl, and she and Chili co-starred with Sherry in the comic Showgirls.

Very similar to the Archie Comics series Katy Keene, which even debuted in the same year. Compare Patsy Walker.

Millie the Model provides examples of the following tropes: