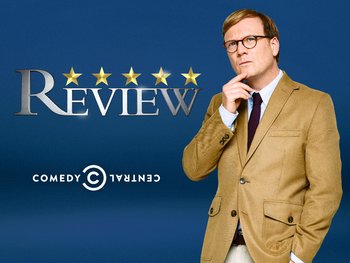 "Life. It's literally all we have. But is it any good? I'm a reviewer, but I don't review food, books, or movies. I review life itself. Welcome to Review, I'm Forrest MacNeil."
Advertisement:

Review (sometimes known as Review with Forrest MacNeil) was an American television mockumentary series that ran for three seasons (2014–17) on Comedy Central, adapted from the Australian series Review with Myles Barlow and starring Andy Daly (who'd previously appeared in Eastbound & Down, Comedy Bang! Bang!, Delocated, and other shows). The show is ostensibly a parody of Reality Television, with the host, Forrest MacNeil, rating various life experiences suggested by "viewers." Experiences rated by Forrest include quitting a job, going into space, and being a racist

Despite the comical and absurd nature of the activities, Forrest takes his job very seriously, going to great lengths in order to properly rate the experiences. Forrest's total commitment to his job takes a toll on his family and co-workers, particularly his wife. The show features a great deal of callbacks and brick jokes, and much of the plot and humor derive from Forrest's life outside of the show.

For the RedLetterMedia show, go to re:View.