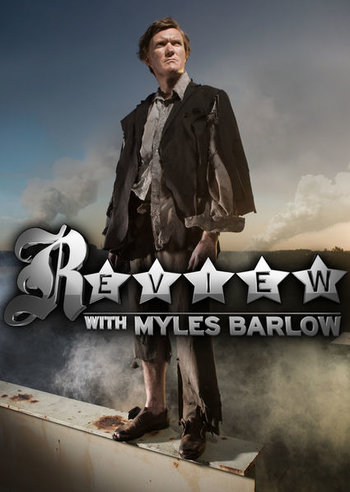 Review with Myles Barlow is an Australian television series that falls most definitely under the category of Black Comedy. The show is written by Phil Lloyd (aka Myles Barlow), and is also co-written and directed by Trent O'Donnell. Each episode goes for 30 minutes, with the first two series having six episodes.

Myles Barlow is a critic, who will review anything and everything. The show begins with Myles reading out the "Letter of the Week", then addressing what he believes to be the letter's main theme. It is a rare thing that Myles will actually give any helpful advice to the author of the letter. One of Myles's running gags seems to be overly long metaphors, which eventually becomed so derailed that even he has forgotten what he was talking about.

An American adaptation of this series, titled simply Review, began airing on Comedy Central in 2014.