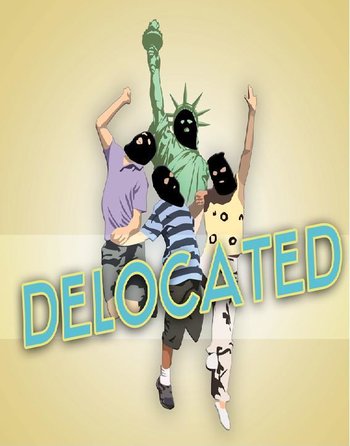 "What happens when you take a family from the Witness Protection Program, move them to New York City, and give them their own reality show?"
Advertisement:

Delocated is a live action Adult Swim show about a man in the Witness Protection Program who's starring in his own Reality Show. He's targeted by a Russian stand-up comedian/hit man. Jon wears a mask all the time and uses a voice harmonizer, and he expects his family to do the same. The entire show and premise are chock-full of absurd Fridge Logic, likely entirely intentional.

The Real Life show produced by PFFR, which also produced The Heart She Holler, Wonder Showzen, and Xavier: Renegade Angel. Unlike their previous shows, Delocated isn't based on Black Humor; rather, it, like The Office, uses deadpan humor. It also has no CGI mixed in with the Live Action, which is odd for a show on the Cartoon Network.

Its pilot premiered on April Fools' Day in 2008, which confused or pissed off some people who were expecting The Boondocks. Its first season ran in 2009 with six episodes, a second in 2010 with 12 episodes, a third with ten episodes in 2012, and its series finale aired on March 7th 2013.