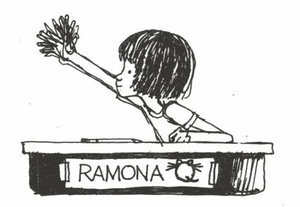 A well-known children's book series by Beverly Cleary about a girl named Ramona Quimby, whose age ranges from 4 to 10 as we see different years of her life.

The series has been made into a short-lived TV show in Canada, simply called Ramona and starring a young Sarah Polley in the title role. This show emphasizes the light drama found in the books over the light humor, and is most heavily based on Ramona Quimby, Age 8, but with a few episodes drawing on Ramona and Her Mother and Ramona Forever too. The series, comprising ten episodes and aired over four months in 1988-89, first aired on CHCH, an independent TV station in Hamilton, Ontario, and then nationwide on CBC and in the U.S. on PBS.

A movie, titled Ramona and Beezus, starring Selena Gomez as Beezus and Joey King as Ramona, was made in 2010.

Ramona Quimby, Age 8 and Ramona and her Father are the two Newbery Honor books of the series.