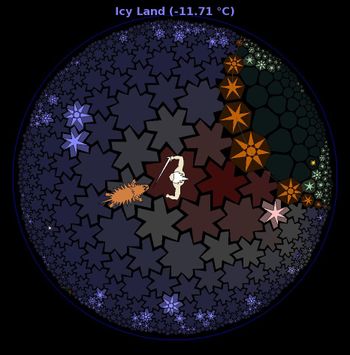 You explore an infinite world with 66 different lands, each with its own enemies, treasures, and power-ups. The goal of the game is to find and unlock one of the Orbs of Yendor, but you're free to ignore the main quest and go for a high score instead.

The game's main gimmick is that it is set on a hyperbolic plane, which has a lot of strange geometric properties. A regular grid of hexagons and heptagons, triangles whose angles add up to less than 180 degrees, straight lines that seem to curve away from you, infinitely large circles. Returning to the same place twice is very unusual. The creator was inspired by M.C. Escher's hyperbolic tilings for some of the graphics.

Advertisement:
Hyperbolic Geometry Primer
Hyperbolic geometry is a type of non-Euclidean geometry, meaning that it does away with some of Euclid's postulates. In particular, it does away with the parallel postulate, stating that given a line and a point, there is exactly one line parallel to the line and going through the point; in hyperbolic geometry, there is an infinite amount of them (see Alien Geometries below for the non-Techno Babble explanation).

Because hyperbolic geometry, much like the surface of a sphere, cannot be represented on a flat screen while preserving both angles and areas, a projection must be used. HyperRogue's default is the Poincaré disk model, which preserves angles, but does away with areas; even though tiles closer to the edge of the disk appear smaller, in hyperbolic geometry, they are exactly the same size. In fact, the entire hyperbolic plane fits in the disk, including points which are infinitely far away (mathematically known as ideal points).

While hyperbolic geometry features many of the same constructs as Euclidean geometry, such as points, lines and polygons, it also features a few constructs with no Euclidean counterparts, many of which are exhibited in HyperRogue. These include:

All enemies can kill you in one hit, but most of them also die in one hit, so combat becomes a series of puzzles, not unlike Deadly Rooms of Death. You can only be killed if a monster backs you into a corner, or if several monsters surround you.

The game is free software, with the music released under CC BY-SA 3.0 and everything else released under GPL2, and can be downloaded for free or compiled from source. However, a purchase on Steam, the Play Store or the App Store will give access to the platform-specific leaderboards and achievements, may include features not yet freely released, and of course, supports the developer. The official website

explains this in more detail.

Compare Hyperbolica, a first-person adventure game by CodeParade that is also set in hyperbolic geometry.