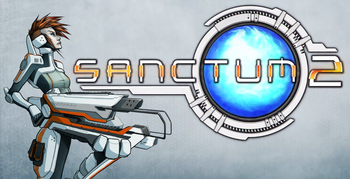 Sanctum and Sanctum 2 are part of an Indie Game series released on Steam by Coffee Stain Studios. The games are touted as the first Tower Defense-meets-First-Person Shooter game, meaning gameplay alternates between building/upgrading and fighting; in other words, think co-op Real-Time Strategy if you played as the soldiers too. The central concept involves managing cash and structures, and defending the defense core lest the base be lost.

Enemies come in the typical Tower Defense flavors, but with several twists:

The first game was released April 15, 2011, and followed by its sequel on May 15th, 2013. To date, four DLC packs have been released for the sequel, plus a skin pack for the core characters. A retro-style 2D pixel art spinoff game called Super Sanctum TD (a conventional tower defence game with no FPS mechanics) was released 5 days before the sequel on May 10th, 2013.

Sanctum and Sanctum 2 contain examples of: