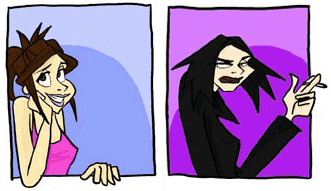 about living in Los Angeles. The two principal characters are Mona Montrois, a Paris-born immigrant to the USA, and Donna, her Valley Girl housemate and best friend. Mona is a would-be Sartre or Camus. In contrast, Donna is a lovable airhead.
Advertisement:

Supporting characters include Mona's brother Pierre, an illegal immigrant to the USA who is looking to get his green card by marrying Donna. While Donna is aware of this. she does concede that Pierre has a certain French charm about him. He has used his charm ruthlessly and has left a trail of American exes behind him.

There is Lucas Lamoureux, desperate failed actor who is attracted to Mona; and Monsieur Smokey, Mona's favourite childhood toy, a stuffed rabbit with which she has long, meaningful conversations. Other recurring characters include Lucas' bitch-queen from Hell Vietnamese-American ex girlfriend Tiffany Nguyen, and Michael, the socially inept single man from downstairs, who is into mediaeval re-enactments in replica armour and knits his own chain-maille.

In March 2015, Jen announced the scaling-down of her commitment to the strip

as her professional life and other commitments are taking centre-stage in her life, and she wants to try other creative avenues. She may revisit it with occasional episodes, but will no longer update daily. Thank you, Jen, and may everything work out for you!

This webcomic strip provides examples of: