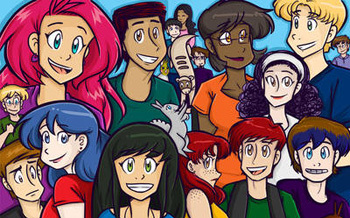 Candi is a slice-of-life webcomic created by Starline Hodge about a young woman in her freshman year of university. The plot focuses primarily on the personal lives of Candi and her fellow residents of an off-campus housing unit run by a foundation; every so often, though, her telepathic pet ferret, Menjou, is the focus of the story as he does battle with the Squirrel Mafia.
Advertisement:

(may be NSFW - there's no nudity, and not even all that much skin, but a few scenes are fairly explicit). As of July 25, 2016, the artist put the comic on indefinite hiatus, pleading burnout.

Hodge is also the graphic designer for Discovery Digital Networks Los Angeles, best known as the home of The Philip DeFranco Show and SourceFed, and also occasional illustrator for Cracked.com.