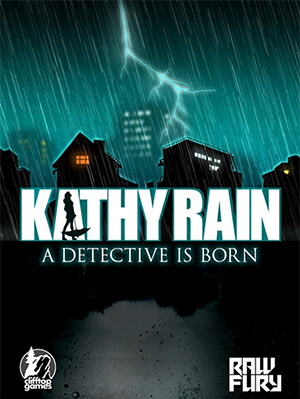 Kathy Rain is a point-and-click Adventure Game developed by Clifftop Games and published by Raw Fury in 2016.

The year is 1995. On a dull September day, journalist student Kathy Rain learns about the recent death of her grandfather, Joseph, and she decides to take a long-overdue trip back to her hometown, Conwell Springs, to be at his funeral. Catching up with her grandmother, she learns that Joseph Rain had been the victim of a mysterious event years before, leaving him a mere vegetable in a way that science was unable to puzzle out. Surprised and curious, Kathy decides to get to the bottom of what happened all those years ago. With nothing but her determination, her motorcycle, her smokes, and her long lost dad's lighter, she explores the town in search of anything that could explain Joseph's condition.

However, not everything is as it seems in this small town, and what starts off as a look into the past soon evolves into a very current and very real danger. As more questions appear around every corner and things take a turn for the weird, Kathy Rain soon finds herself swamped in a mystery. What is the story behind the artist who committed suicide? What was Joseph Rain doing the day he was confined to his wheelchair? Why is everyone in this town so goddamn insane? And will her college roommate stop invading her personal space?

Made in a pixel art styling, the game itself is rather reminiscent of old LucasArts games with a large investigative bent to it. Much of the game is about asking around about various topics Kathy writes in her notebook and gathering information. That being said, every once in a while you open up a new area to explore and sleuth about, and there are plenty of puzzles to test your thinking skills.

version was released on October 26, 2021, featuring touched-up graphics, extended story, including an expanded ending, and new areas with new puzzles.

Due to the game having a mystery plot, expect marked and unmarked spoilers!

The game provides examples of :