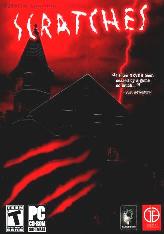 "I arrived at Blackwood Manor one cold Saturday morning amidst a thick veil of fog, the weather didn't look good and there was an unnatural calm surrounding the area. Yet... I soon became entangled with the place..."
— Michael Arthate, on the opening monologue.
Advertisement:

is an Argentinian mystery/horror point-and-click adventure game for the PC released in 2006. A Director's Cut was released a year later featuring an alternate ending. It was developed by the now-defunct NucleoSys and published first by Got Game and currently by Meridian 4.

It features a soundtrack made by Cellar of Rats, which helps building the atmosphere.

The game has you playing as Michael Arthate, a rising horror writer who has acquired a Victorian mansion nestled in the sleepy English town of Rothbury to inspire him into finishing his new book. However, he soon discovers the mansion's horrible past with a murder committed by the manor's former owner, James Blackwood, followed by his sudden death and subsequent disappearance of James's best friend and house caretaker, Christopher Milton. In addition, Michael hears strange, unnerving scratching noises echoing through the house every night. Michael then becomes poised to solve the mystery.

The Director's Cut includes an epilogue, subtitled The Last Visit. Following a Time Skip, the Blackwood Manor has since become the subject of various thefts and vandalism after Michael's stay. The town of Rothbury, wanting to put this whole thing behind them, has ordered the manor to be demolished, but not before an investigative journalist is sent to the manor to finally put to rest what really happened inside that house.