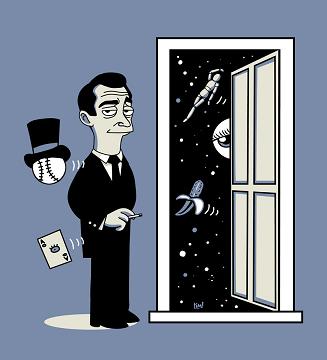 "You are entering the vicinity of an area adjacent to a location. The kind of place where there might be a monster, or some kind of weird mirror. These are just examples; it could also be something much better. Prepare to enter: The Scary Door."note The Scary Door by ninjaink

One very common, and fairly symbolic, way to begin a story is with the opening of a doorway. In prose or film, the act of passing through an entrance sets events in motion, transporting the characters into a new situation and bringing the audience along for the ride. In adventure games, a locked or obstructed entrance often constitutes the first challenge for players, giving them a chance to apply their ingenuity before they delve into the plot line. Either way, it's a handy alternative to In Medias Res.

Variants may use an opening door to mark major transitions between phases of a story, or to kick off the main plotline after a Batman Cold Open.

Ubiquitous in casual adventure games, so much so that aversions tend to feel like subversions. Also especially common in children's programs.

Opposite of Door-Closes Ending; combining both tropes in the same work creates Bookends.