Webcomic / How I Became Yours 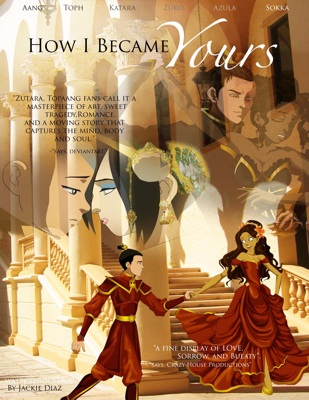 How I Became Yours is an Avatar: The Last Airbender fancomic by Jackie Diaz. The story takes place three years after the canonical end of the show, and takes some liberties concerning how things worked out (particularly romantically)...

Toph and Katara have taken up residence at an Earth Kingdom estate owned by Toph's family, where they spend their days monologuing and pining after their One True Loves (Aang and Zuko, respectively). Oh, and Sokka is there too apparently. Elsewhere, unbeknownst to the girls, Aang and Zuko also pine after their true loves.

Zuko discovers that his jealous wife Mai hid Katara's pregnancy from him by hiding the letters revealing the truth, and murdered her unborn child. After disowning and humiliating Mai he runs away from the still-recovering Fire Nation and makes a beeline for Katara's 18th birthday ball, where the Star-Crossed Lovers joyfully reunite (Aang and Toph also hook up at this event). Unfortunately for them, hell hath no fury like a Woman Scorned: Mai is not about to take this lying down, so she enlists the help of a firebending assassin named Sho.

Meanwhile, Sokka comes across an injured Azula who can't remember anything about her past and breaks down crying when confronted with it. But rather than toss her back out into the streets or locking her away where no one will find her, the Gaang takes her under their wing and cares for her. During this time she and Sokka fall in love with each other...

The comic enjoyed moderate popularity before certain members of the Avatar fandom got wind of it, and promptly saw to it that the artist was banned from DeviantArt (the comic's former home) for recurring instances of art theft. Diaz's repeated denials of tracing and art theft in the face of overwhelming evidence (screenshots from the show and her drawings match up line for line) did nothing to endear her to the fandom. She has sadly friends-locked the entire comic at her MySpace page, however, you can view most of it on this Diaz fan's Photobucket account

You can also see the whole comic in order on Tumblr with a bit better picture quality here.

She has also created a sequel comic: Rise of the Agni Army. Don't expect much. It's a Dead Fic.

For the Legend of Korra Spiritual Successor, see Abuse Cycle.