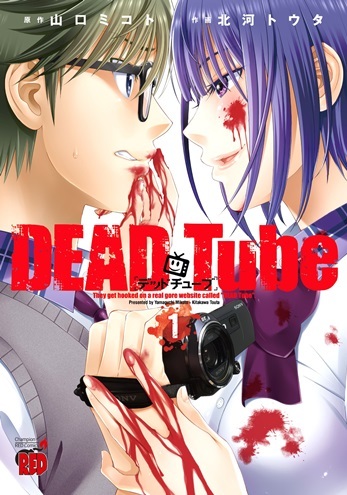 Machiya and Mashiro, home movie makers.
Sex and murder are probably the two easiest ways to draw attention. What would happen if there was a website that made its business exclusively off those two? Horrible things would happen, that's what.
Advertisement:

Machiya Tomohiro is the cameraman for his school's film research club. One day during his club activities, he is called over by Mashiro Mai, a beauty from the Swimming Club. Mashiro asks Machiya to film her for 48 hours straight, under two conditions:

Machiya complies, though all the while wondering why such a beauty would tell a plain person, out of the blue, to follow her around for two days. Mashiro is first seen going through her normal routine, working through her club activities, going to school, talking to her friends, going home, sleeping, etc. Then, on the second day, Machiya is surprised to see Mashiro going on a date, with a really rough-looking guy no less. He starts to feel embarrassed, but he still keeps filming each step she takes.

After a rather normal date, Mashiro and her partner settle down in a warehouse to engage in sexual intercourse, and Machiya reaches a low point, thinking Mashiro just wanted to embarrass him. However, Mashiro insists that Machiya keep filming, and keeps on going. With both Mashiro and her supposed boyfriend naked, things look to get hot and heavy... and then Mashiro grabs a baseball bat and bludgeons her unsuspecting "boyfriend" to death, in pure glee. Machiya thinks this is weirdly hot. Things get even darker from there.

Note that since this series focuses on the deaths of others, uncensored spoilers may be present.

They get hooked on a real gore website called "DEAD Tube".