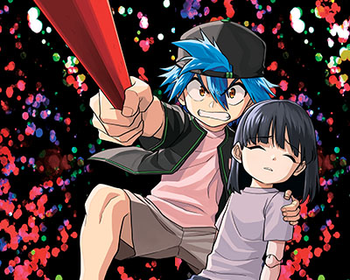 The Last Saiyuki (最後の西遊記 Saigo no Saiyuuki, or, literally, The Last Journey to the West), is a manga written by Daijirou Nonoue and serialized in Weekly Shounen Jump, starting in early 2019.

The story focuses on Ryunosuke, a boy who dreams of being a baseball player, but his dreams are cut short when his father brings home a young girl. This is not the only change in Ryunosuke's life, in order to take care of Koharu, his new sister, he must quit school and spend all his time at home. Koharu is blind, does not have the use of her arms or legs, and her voice can bring monsters into the world.

The Last Saiyuki contains examples of the following tropes: