Manga / Uncle from Another World 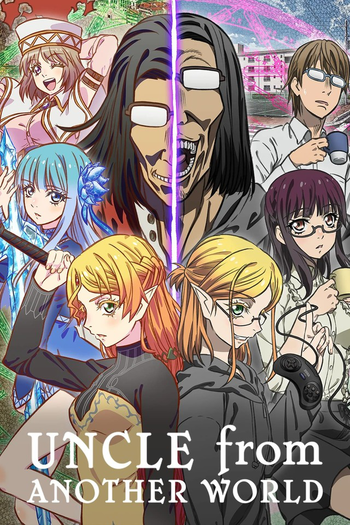 In the year 2017, thirty-four-year-old Yōsuke Shibazaki has finally awakened from his seventeen-year-long coma, watched by his college-aged nephew Takafumi Takaoka. To his nephew's bafflement, Yōsuke claims to have been transported to another world and begins speaking in what he claims is the language of that world, before even further bewildering him by showing that he has retained the powers he gained upon waking up in Japan.

Once he is out of hospital, however, Yōsuke finds that his powers barely help him deal with the changes on Earth in the intervening seventeen years, ranging between the World Wide Web, the rise of smartphones, Japanese pop culture, and the demise of Sega as a video game console powerhouse. With the help of his nephew, who offers him to live with him, Yōsuke adapts to the much-changed world.

Conversely, Yōsuke shows Takafumi, as well as his childhood friend Sumika Fujimiya, video clips of his many not-so-sweet memories of the world of Granbahamal, what with him being frequently mistaken for a sapient orc on account of his gaunt appearance, even as both Takafumi and Fujimiya bemoan all the opportunities he missed to at least make his life better, in particular reciprocating the affection of three beautiful girls—Elga, an elven swordswoman; Mabel, an ice witch; and Alicia, a priestess.

Uncle from Another World (異世界おじさん, Isekai Ojisan) is an ongoing 2018 manga written and illustrated by Hotondo Shindeiru and published by Kadokawa Shoten under its MF Comics imprint's ComicWalker magazine, with an English release under Yen Press. It also had a crossover with Chain Chronicle in 2020, as well as an anime adaptation directed by Shigeki Kawai under AtelierPontdarc studio for Netflix starting July 2022.

These tropes came from another world: