Literature / The Legend of Sun Knight 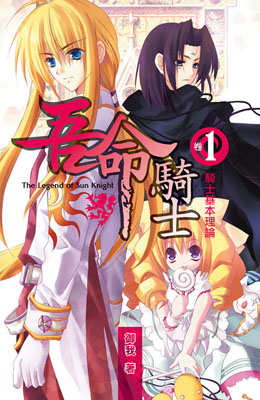 “The benevolent God of Light will forgive your sins.”
I must have said that line at least a million times in my time as the Sun Knight.
However, the greatest wish in my life is to be able to stand before the entire continent and roar, “Damn your ‘the whole continent knows’! This Sun Knight just doesn’t feel like smiling! I just don’t want to forgive these human trashes! I just want to pepper my sentences with ‘f***’!”
— The Sun Knight
Advertisement:

The Legend of Sun Knight or Legend of the Sun Knight (depending on who you ask) is a series of Taiwanese novels written by Yu Wo, following the adventures and misadventures of the thirty-eighth generation Sun Knight and the other 11 holy knights. In 2010, it was adapted into a manhua drawn by Os Rabbit Cat/Neko Kreus.

In theory, the Sun Knight is kind, merciful and will never abandon a life. He always smiles and praises the Light God in every sentence; he doesn't drink or swear; he is pure-minded. In practice...not so much - he's a closet pervert, has a ridiculously high tolerance for liquor and a large swearing vocabulary. The rest of the Holy Knights are pretty similar, with expected personalities completely different to their real ones. Now add in two other major religions competing with the Church of the God of Light, a fat pig of a king, and more darkness and evil in the world than you can shake a stick at, and you have a pretty good idea of what The Legend of Sun Knight is like.

Translations for the novel can be found here

For other works by the same author Yu Wo, see ½ Prince and Eclipse Hunter.

Now with a characters sheet

Note that it's a legitimate concern, since everyone expects the Sun Knight to be perfect in every way. Sun has to spend a lot of time and money on beauty products and treatments (and skin care was a major part of his curriculum)