Literature / The Fool of the World and the Flying Ship 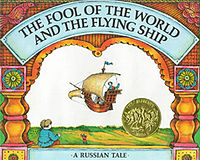 "The Fool of the World and the Flying Ship" is based on a Russian folk tale that originated from Old Peter's Russian Tales in 1916. A proclamation went out through all the land that whosoever could build a flying ship would win the hand of the Tsar's daughter. The youngest son of a simple peasant shows up to claim her, and the dumbfounded Tsar quickly has second thoughts, setting several 'impossible" tasks for 'The Fool of the World' and his remarkable friends.

The story has been translated into a children's book that was written by Arthur Ransome titled The Fool of the World and the Flying Ship in 1968 and was well known for winning the Caldecott Medal in 1969, for best illustrations.

The story has also been translated into a Stop Motion animated feature film produced by Cosgrove Hall for The Cannon Group and the Rabbit Ears Productions version narrated by Robin Williams.

Read a synopsis on the Wikipedia article

Alternative Title(s): The Fool Of The World And His Flying Ship