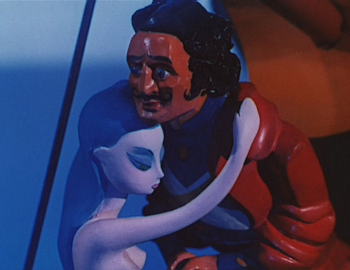 Don't they make a lovely not-couple?
Published by Crosbie Garstin in Vagabond Verses in 1917, "The Figurehead" is a Narrative Poem. Using Black Comedy to work to the punchline and Nautical Folklore as setting, the poem details the short but eventful career of the titular figurehead.
Advertisement:

One day, a versed carver wanted to create a saint in wood, but the parson wasn't interested. With the carving already complete, the carver opted to paint it up as a soldier and sell it as a figurehead instead. Its ship sets out and reaches the equator, where the handsome figurehead catches the attention of a mermaid, who is none other than the daughter of Davy Jones. She tries courting the figurehead with songs and regularly climbs up the bobstay to be with him, but no response comes. Distraught, the mermaid calls on her father for help. Davy Jones sinks the ship, allowing the mermaid to gather the figurehead and take it to her grotto. She continues to court him day and night, but still is ignored. And she'll forever be. Because while the figurehead may have been reworked to represent a soldier, he continues to regard himself a saint.

The poem has been adapted twice under the same name. The first time was in 1953, when the poem was turned into a 7-minute Stop Motion short by Joy Batchelor, John Halas, and Allan Crick. It debuted at the Cannes Film Festival. The other is a 2016 children's book as a student project, which art can be found here

"The Figurehead" provides examples of the following tropes: