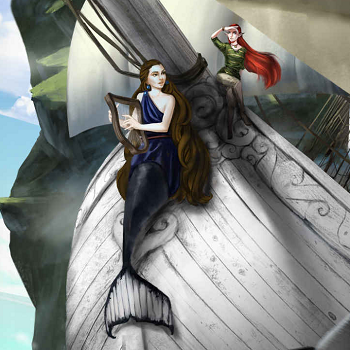 "Who? What? Where? Oh, cripes, not again. Couldn't just leave me alone, could you? Most pirates would be happy with a gorgeous, inanimate figurehead. But nooooo... you had to stick those accursed voodoo earrings into me! Well, here I am! An enchanted, talking, ticked-off figurehead! Am I everythin' you hoped for?"
— The Dainty Lady, Escape from Monkey Island
Advertisement:

In a story that brings the fantastical and the nautical together, a Cool Boat is bound to show up. But what makes for a Cool Boat? Well, having an imposing or gorgeous figurehead is a good start, and it doubles down if said figurehead is alive.

A sapient figurehead is a (usually) wooden version of the Living Statue and sits on the crossroads of a nautical Gargoyle and an analog Spaceship Girl. Like the latter, it's (almost) Always Female due to the age-old custom of referring to seafaring vessels as "she." Of course, there is a superstition that a woman on board invites misfortune, but figureheads of any form are understood to be protectors of their ship and that overrules their gender.

There are about three variations of sapient figureheads:

This trope generally isn't in effect in cases of Taken for Granite, because the affected isn't alive during their time as figurehead. Heads on organic ships also tend to be a no, because an organic head attached to an organic body is just a head, not a figurehead.

Decorating the bow of a boat goes back a long way in human tradition, sometimes as just a means to make the boat prettier, sometimes to protect the crew from evil, and sometimes to infuse the boat with the qualities associated with whatever depicted. Figureheads as they are imagined today came about in the 17th Century in Europe, and while the superstitious element never disappeared, the subjects chosen to depict often helped convey the name of the boat in a time many were illiterate. The practice fell into decline in the 20th Century for practical reasons and because reading had become a common skill.

Although rarely shown in fiction, boats can have dual figureheads, such as the SS Great Britain, which features a unicorn on the left and a lion on the right to represent the United Kingdom. Detailed ornamental carvings may also be found on the stern, framing the fancy cabins meant for the captain and passengers. Riverboats, which are too small for figureheads, may have a statuette adorning the steering wheel.

A Sub-Trope of Living Statue and a Sister Trope to Spaceship Girl. Not to be confused with the tropes Puppet King and Authority in Name Only, which are about the other kind of figureheads.