Western Animation / The Fool and the Flying Ship 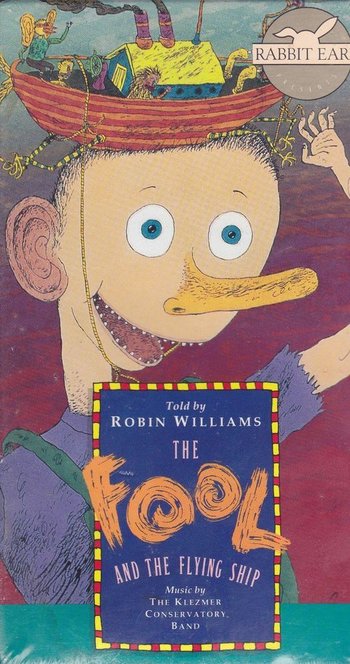 The Fool and the Flying Ship is the first entry in Rabbit Ears Productions "We All Have Tales" series and is narrated by Robin Williams along with music by the Klezmer Conservatory Band and artwork by Henrik Drescher and it was made in 1991.

It is based off Russian folktale "The Fool of the World and the Flying Ship" that was collected in Arthur Ransome's Old Peter's Russian Tales in 1916.

The story starts off with the Tsar of all of Russia issuing a proclamation throughout the land that whoever builds him a flying ship will win the hand of his daughter, the princess. The youngest son of a peasant family, who was known as "The Fool," decided to try his luck to build a flying ship and once he obtains a flying ship, he meets several strange men along the way who each possess a unique ability such as a man who can run really fast and a man who can eat food twice his size.

Once the Fool and his companions reach the Tsar's palace, the Tsar is not pleased at the idea that a peasant would claim his daughter's hand in marriage and so, he decides to set up several impossible tasks for the Fool and his friends to complete before the Fool marries the Princess.

Rabbit Ears' version of "The Fool and the Flying Ship" contains the following examples: