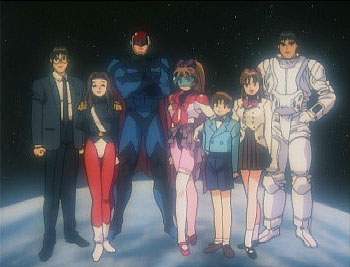 In the middle of the 21st Century, gadgeteer Hiroshi Ozora has created the crowning achievement of his brief career: the Mol Unit — a device which can enclose its user in a customizable pocket dimension, protecting him from all harm and allowing him to interact with the world in ways that would seem to defy physical laws — in effect, to become Superman. Naturally, the lean and lanky Hiroshi sculpts the "event horizon" so that he looks like a muscular Super Hero when the device is activated. Its only drawbacks are that the Mol Unit can only operate for 666 seconds at a time, and its user must be nude or else the formation of the event horizon shreds his clothing.

Hiroshi intends to show off the Mol Unit to his old mentor Professor Amagi, with whom he shares both a friendly rivalry as a technologist and a love of old 20th-century devices. But before he gets a chance, agents of a mysterious new supervillain calling himself "Professor Machinegal" strike the social event they are both attending. Piloting insectoid mecha, they attempt to steal its centerpiece — a painstakingly restored Formula One race car from the 20th Century. Hiroshi is forced to actually use the Mol Unit to stop the thieves — and in the process becomes Tokyo's first superhero, Moldiver.

Afterwards, Hiroshi's ditzy younger sister Mirai becomes suspicious and investigates, eventually finding his development notes and system. Intrigued and excited, she modifies the Mol Unit so that has a second "look" — one that's more Sailor Moon than Superman. Unfortunately, the changes add just a little instability to the Mol Unit, making it impossible for the wearer to be completely sure just which appearance he — or she — is going to get when it activates.

As Mirai gradually assumes the mantle of Moldiver from Hiroshi, matters swirl around them and seem to converge: Machinegal's continuing depredations, an accelerating deep space exploration program, the unexpected discovery of a maximum number of uses in the Mol Unit, the arrival of a mysterious third Moldiver, and even a family friend on whom Mirai has a crush. Everything is resolved in a romantic and optimistic climax that is conclusive but still holds out the possibility of more adventures.

Moldiver is a six-episode OVA miniseries produced by AIC in 1993. Traditionally animated, it generally has good to excellent production values. Pioneer Entertainment brought it to the United States as part of its very first salvo of anime imports in the early 1990s, and as was usual for Pioneer at that time, the dubbing cast is one of the best.

The story is clearly having fun playing with both the superhero and magical girl cliches in a setting that would seem to be inhospitable to both, and it's not afraid to turn other cliches on their ears, as well — one of the most delightful ironies in the series is that the "civilian identity" of the villainous Professor Machinegal is also the lowest-bidder contractor tasked with the job of repairing the damage caused by his own crime sprees — damage that escalates whenever Moldiver gets involved, driving him to distraction with the plummeting return-on-investment he gets from his crimes.