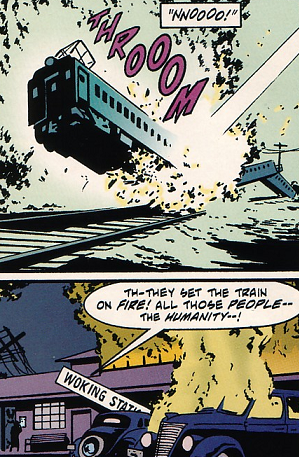 Stock Phrase for whenever someone sees something particularly horrible. So horrible, in fact, that you just can't help but shout your horror to the heavens. Originated in 1937, when reporter Herbert Morrison witnessed The Hindenburg disaster first-hand. Morrison kept reporting, though he was clearly horrified, and, overcome, exclaimed "Oh, the humanities!" ("Humanity" was apparently a term Morrison frequently used to describe any large group of people; in context, immediately prior to the disaster, he'd used the word to refer to the "mass of humanity" awaiting the blimp's arrival, and was expressing concern that they could be injured, rather than appealing to humanity as an abstract concept.) In interviews later, he explained he had said that because he thought everyone on board had died.
Advertisement:

"Oh, the humanity" is actually much older than Morrison. It was used in at least one Civil War letter, from Samuel D. Lougheed to his wife Jenny in October 1862: Talking about all the men who had been killed or were suffering with terrible injuries, he wrote: "O the humanity. O the horrors of war. Truly it may be considered the most cruel and awful scourge which can befall a nation."

Today, nearly always Played for Laughs. Not to be confused with Oh God, with the Verbing!.