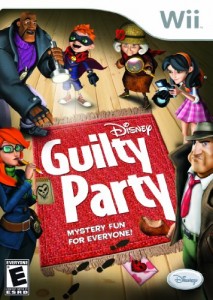 Disney Guilty Party is a game for the Nintendo Wii produced by Disney Interactive and developed by Wideload Entertainment. Despite the "Disney" in the full title, it is, like Spectrobes, a wholly original property not connected to any other Disney product. Like a great many other games with "Party" in the title, it is primarily designed as a multiplayer game, and there are quite a few Mini Games. Unlike other games of its genre, though, the mini-games are less the point of the endeavor than a means to an end. The primary gameplay is a mystery game, like a digital Clue.

The Dickens Detective Agency is a world-famous group of related sleuths, lead by their patriarch, Dorian "The Commodore" Dickens. He is retiring from the business, but he'll still be around the Dickens family manor to dispense sage advice. Suddenly, disaster strikes when his archnemesis, the nefarious Mr. Valentine, kidnaps Dorian's wife Olivia. Now it's up to the six active Dickens sleuths to track down their mother/grandma/aunt and put a stop to Mr. Valentine's plans!