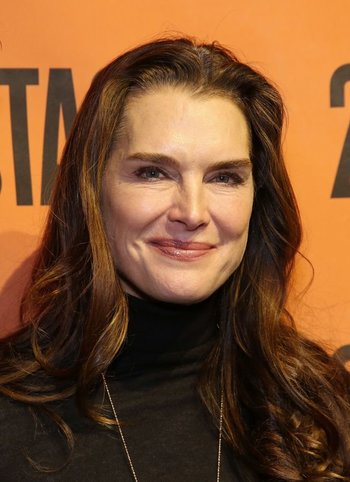 Brooke Christa Shields (born May 31, 1965 in Manhattan, New York) is an American actress and model.

She started modeling at eleven months of age and continued doing so throughout her teens, eventually becoming one of the most popular models of the 1980s. Shields is probably best known for the Calvin Klein jeans commercials of the early 1980s (which were considered scandalous back then and were ripe for parody on shows like Saturday Night Live, Fridays, and SCTV). During this time, she played the role of a child prostitute in the controversial Pretty Baby. She starred in several well-known films in the 1980s and 1990s such as The Blue Lagoon and Endless Love. She's also done a couple of TV roles, such as playing the eponymous character in Suddenly Susan, and guest-starring in shows like That '70s Show, Hannah Montana, and The Middle.