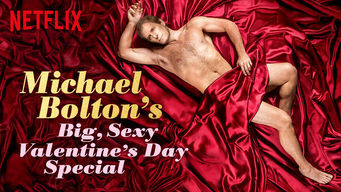 There were a lot of very surprised Netflix users on the morning this was released.
Michael Bolton's Big, Sexy Valentine's Day Special is a Netflix variety special starring Michael Bolton. It was created by Scott Aukerman of Comedy Bang! Bang! fame, and released on February 7th, 2017.
Advertisement:

When Santa Claus's elves accidentally make too many toys, Santa charges Michael Bolton with creating a Valentine's Day special to encourage couples to copulate so there will be enough babies to play with them by Christmas.