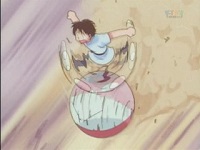 It was a good idea on paper.

Ash and co run into a Pokemon Rancher named Lara Laramie when Ash mistakenly tries to capture one of her Tauros, thinking he is in the Safari Zone. They find out that there is a big Pokemon race coming up and are invited to stay and watch. Unfortunately, Lara breaks her arm before she can compete, requesting a reluctant Ash to ride her Ponyta in her place.