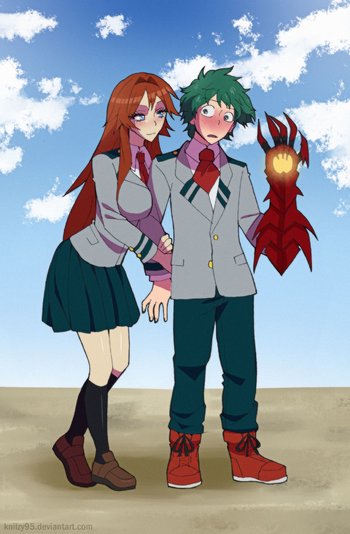 ) is an ongoing Fusion Fic of My Hero Academia/High School D×D, with characters from other manga thrown in, where people with Quirks unknowingly live next to angels, fallen angels and devils, as well as people with strange abilities called Sacred Gears.

In this world, 80% of the population has a special ability, sometimes a superpower called a Quirk. One young man by the name of Midoriya Izuku wants to be a Pro Hero, a super-powered crimefighter, so he can save people with a smile and bring them hope in their time of need - much like his favorite hero, All Might.

The only problem? He's Quirkless, part of those who lack a Quirk. However, no amount of bullying or scorn is going to beat his desire to become a hero out of him.

A pretty girl he meets by pure chance tells him she can help him become a hero, in exchange for a date. Against his better judgment, Izuku agrees to it...

... and the girl, who turns out to be a fallen angel, kills him. In his death throes, Izuku makes one last wish: a chance to become a hero.

This catches the attention of Rias Gremory, a beautiful girl who just happens to be both a General Studies student at U.A. (Japan's most famous Hero School) and a Devil King. Moved by the intensity of Izuku's wish, as well as intrigued by his hidden power, she revives him by reincarnating him into a devil, as part of her Peerage.

This plunges Izuku into being part of two worlds, as he deals with villains from both sides of the masquerade while learning how to be a Hero... and dealing with the harem that he is unwittingly forming around himself.

That might as well be the hardest thing he can handle.