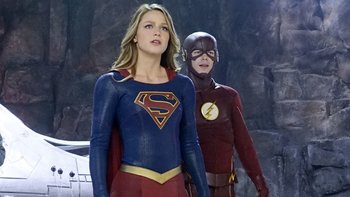 Proof that superheroes can actually get along.
Advertisement:

Crossover episode with The Flash which sees The Flash's dimension-traveling abilities taking him to Supergirl's universe. While Kara tries to help Barry find a way home, Siobhan uses her new powers to break out Livewire so they can take revenge on Supergirl and Cat Grant. A rare modern-day example of a cross-network crossover, as at the time Supergirl aired on CBS and The Flash airs on The CW.