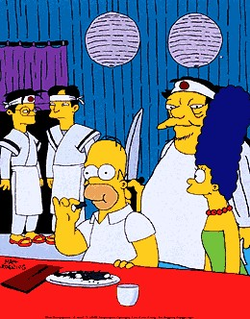 The Simpsons have dinner out at a Japanese restaurant, which turns deadly when Homer eats some improperly-cut fugu (raw blowfish) and is told by Dr. Hibbert that he has only 22 hours left to live.

Thirteen years before this episode fugu poisoning was the plot of an episode of Columbo.