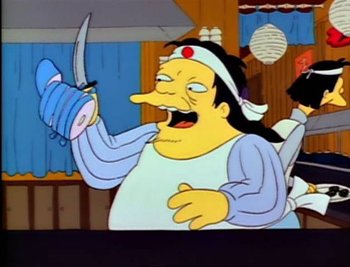 Not done with wires.
The Asian continent is home to many culinary traditions, each distinct and unique. Many of these cuisines are noted for their extreme care and delicacy in balancing flavors and meticulous presentation; for example, a Japanese sushi chef will spend years learning to cook rice properly before they're allowed to touch a knife to a fish. From Korea's infinite varieties of kimchi, to Vietnam's pho noodle soup, to Thailand's love of fiery chilies, to India's mastery of spices, to China's wealth of regional cuisines, the flavors of the Orient are highly prized by eaters the world over.
Advertisement:

In Western media, however? Asian food often means exactly one thing: theatrically swinging around knives, regardless of the environment, circumstances, or even the food being prepared. Whether it's a sushi feast or a humble plate of beef and broccoli, a fictional character cooking Asian food will often pick up a knife or cleaver and start cutting in all manner of exaggerated, theatrical, extremely dangerous ways, as though they're fighting a martial-arts battle instead of making dinner. Yet despite all of this, the cook isn't just swinging a blade around at random, their actual cuts can be inhumanly precise. When this happens, the character has caught a serious case of Asian Cleaver Fever.

While it does crop up in the Action Genre from time to time — especially when combined with the Chef of Iron trope — Asian Cleaver Fever is primarily a Comedy Trope. It's more commonly a Sight Gag, or a setup for a joke involving Amusing Injuries, than a serious plot point in itself. Thus, examples should be limited to instances where cooking in such a way would be absurd or at least unexpected, or where such behavior ends in Amusing Injuries, a fight, or some similar consequence.

Naturally, the idea that all — or even most — Asians cook with hazardously exaggerated knife work is nonsense. Asian cookery is no more theatrical or martial than any other type. Nevertheless, there is a tiny amount of Truth in Television to this trope, in the sense that a particular style of restaurants serving Asian food — typically referred to as "hibachi grill" (or, more precisely, teppanyaki) restaurants — really do incorporate knife acrobatics and general theatrics into the process of cooking and serving patrons. The most widely known example is the Benihana chain of restaurants. Given that Benihana started out when the popularity of Asian cuisine was still in its infancy in America, it's likely at least one source of inspiration for this trope.

Another possible inspiration may come from the cutlery used in Asian cookery, namely the caidao, or Chinese vegetable cleaver. It's a rather large and intimidating blade that certainly looks like a weapon, and swinging it around makes for a striking visual. However, despite its visual similarities to a Western meat cleaver, it's a fairly thin blade designed for everyday slicing and chopping, not heavy tasks like hacking meat or bone.

It's worth mentioning that this trope often plays into National Stereotypes — while the cook wildly flinging around knives need not be Asian to fit this trope, they very often are. Depending on how the trope is played, this can result in either a harmless, good-natured joke, or a gag that's insulting or even kind of racist. However, this trope isn't strictly a Western one: it does appear in Asian media from time to time, often to drive home a character's skill with bladed weapons, or skill in the kitchen.

Almost always involves at least one Absurdly Sharp Blade. Can overlap with the Chef of Iron trope, especially the variety that uses cooking implements in their style of combat. May involve Martial Arts and Crafts, if the chef uses his knife skills for combat purposes or considers his cooking to be a martial art. Not to be confused with Asian Cleavage Fever.