Manga / The Disappearance of Nagato Yuki-chan 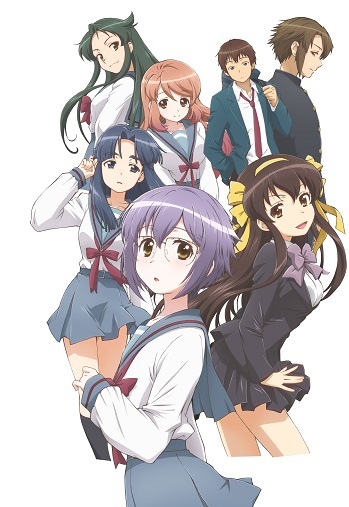 It's every bit as cute as it looks.
Advertisement:

The Disappearance of Nagato Yuki-chan (in Japanese, Nagato Yuki-chan no Shoushitsu) is a Spin-Off slice-of-life manga for the Haruhi Suzumiya series. Serialized from 2009 to 2016 in Young Ace and compiled into 10 volumes, the manga is written and illustrated by Puyo, creator of the original Haruhi-chan manga. In this alternate universe, Yuki Nagato is not an alien; she's a quiet, ordinary girl who is the president of North High's Literature Club alongside her best friend, Ryōko Asakura, and Kyon, whom she harbours feelings for. As such, the bashful Yuki becomes even more uncertain around Kyon, who's enjoying the idle, calm environment that the Literature Club provides. With the ever-watchful Ryōko keeping an eye on Yuki, the latter's feelings do not go unnoticed; Ryōko soon pushes the reluctant Yuki forwards in expressing these feelings towards Kyon.

However, these peaceful days do not last: shortly after celebrating Christmas together, Kyon and Yuki encounter none other than Haruhi Suzumiya, who'd been camped out at the park in an attempt to capture Santa Claus. Her boisterous presence and actions result in Itsuki Koizumi, Mikuru Asahina and Tsuruya joining the Literature club. Kyon and Yuki are suddenly thrown into adventures and mysteries that gradually, but surely, closes the distance between the two. As they spend more time together, hints of a Love Triangle begin to materialise, as well. An Animated Adaptation produced by Satelight was aired as part of the Spring 2015 Anime season, and an OVA also aired during October 2015.

The Disappearance of Nagato Yuki-chan provides examples of: