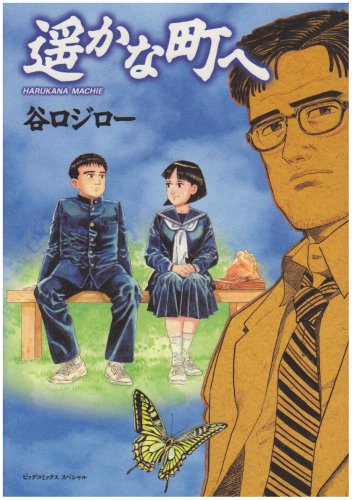 To a Distant Town (original title 遥かな町へ) is a Seinen manga by Jiro Taniguchi.

Nakahara Hiroshi is a middle aged Salaryman, who feels disconnected from his wife and children, and is haunted by a sense of existential failure. One early morning, after a night out, he takes the wrong commuter train home and ends up in the suburban town where he spent his early life. On a whim, he decides to visit his mother's grave, and while he prays in front of it, he passes out.

He wakes up feeling oddly different. He's shorter and lighter than he's been in decades. Looking at his reflection, he realizes he has been sent back in time, and he is once again a 14-year-old boy. He must re-adapt to the school and family life of a teenager in the early 1960's, all the while trying to figure out why his father mysteriously disappeared that summer, never to return.

The story was adapted to movie format in 2010 with the French film Quartier Lointain, which moved the setting to 1960's France. Taniguchi got a cameo in it.