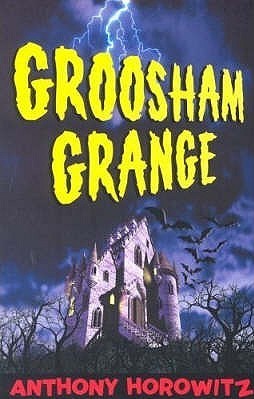 Groosham Grange (1988) and its sequel The Unholy Grailnote Originally published as Return to Groosham Grange (1999) are a very fun YA comedy/horror series, written by Anthony Horowitz. It follows the adventures of David Elliot as he attends the titular school of magic to become a wizard. There are striking similarities with the much later Harry Potter series: the characters are similar, a magic train from a regular station takes the students to the school, there are talking portraits, a magic mirror as a central plot point, a suspicious teacher stealing a magic cup... and so on, and so forth. Although J.K. Rowling has repeatedly been asked whether or not she's read the books, she refuses to comment so far. A third book in the series was planned, but ironically the advent of Harry Potter put Horowitz off the idea of writing it.
Advertisement:

The central character, David Elliot, is a 12-year-old seventh son of a seventh son, cruelly mistreated by his parents. His father chooses a series of repressive boarding schools for him, where David does not perform well.

After being expelled from his "last-chance" school, they receive at home the unexpected call from an unknown school, Groosham Grange, of which nobody has heard of before. This school, located on Skrull Island, an island off Norfolk, earnestly invites David to enter it. His father jumps at the chance to pack him off, especially since it appears that the place is suitably severe. He must take a train from Liverpool Street to King's Lynn.

On the train he meets two other new students, Jill Green and Jeffrey Joseph. Along with Jill (seventh daughter of a seventh daughter) and Jeffrey, David anticipates more mistreatment, and makes a pact with them that they will escape at any cost. After they arrive, they start to learn strange things, are baffled by inexplicable disappearances, very peculiar teachers (including a werewolf and a ghost), assorted frights — and an absence of punishments.

They are determined to solve the mystery of the school, but then Jeffrey begins acting suspiciously, seeming to side with the other students rather than with David and Jill...

Slowly, David discovers that he has been recruited to a school for wizards and witches, because he is a wizard himself, and that the staff hopes to help him unleash his full potential as the other students do. David must decide if he will remain at Groosham Grange or not. His dilemma lies in his wish to avoid evil, but the Headmaster tempts him with the promises that he can learn "how to make gold out of lead, how to destroy your enemies just by snapping your fingers... [and] to see into the future and use it for yourself". Of course, the outside world can't ever find out...