Literature / The Language of Thorns 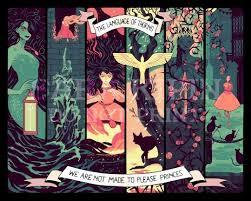 The Language of Thorns: Midnight Tales and Dangerous Magic is a collection of short stories by Leigh Bardugo, set in The Grishaverse. Each is a twisted fairy tale. It consists of the following stories: