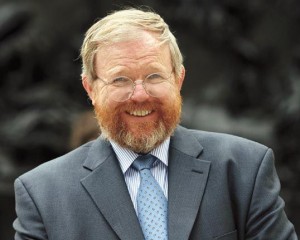 "I come from Des Moines. Somebody had to."
—first line of The Lost Continent
Advertisement:

William McGuire "Bill" Bryson, born 1951 in Des Moines, Iowa, USA, is an American-British journalist-turned-author. He moved to the UK as a young man and has since alternated continents of residence, providing him with a unique cross-cultural perspective that has in turn been translated into hilariously acerbic travelogues. He now has dual citizenship of the two countries. In his more recent books he has returned to his early focus on general socio-historical trivia.

Bryson's breakout to celebrity status in Britain came with 1995's Notes From A Small Island, describing what was at the time a farewell tour of the country he decided to take before moving his family back to the US — though it turned out that 8 years later they would return to England, where he has lived ever since. It was a huge number-one bestseller when it was first published, and has become one of Britain's most loved books, going on to sell over two million copies.

During his spell back Stateside he wrote the 1998 account of his attempt to walk the entire length of the Appalachian Trail, A Walk In The Woods, which has become perhaps his best-known work there. In 2015 a movie adaptation was released in which the bespectacled, bearded writer was, to his own not inconsiderable astonishment, portrayed by Robert Redford. The pleasure of this was dampened only slightly by the forty-something Bill in the book being depicted on screen by a seventy-eight-year-old Redford; as Bryson ruefully noted, the latter still looked better at nearly 80 than he himself had in his forties...

In his spare time he has served as the Chancellor (basically, honorary President) of Durham University and as a campaigner for various causes active in the preservation of historical UK buildings and landscape features. He has nearly a dozen honorary doctorates from universities in the UK and Iowa.