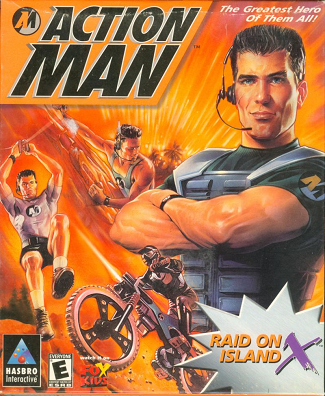 In 1966, Hasbro licensed the British company Palitoy to manufacture and sell the popular G.I. Joe toy in the U.K. Because the term "GI Joe" is very American, they decided to rename him "Action Man." He was more or less the same toy as his American counterpart, but his costumes and accessories were quickly redesigned to depict British military uniforms and equipment. In the 1980s, with Hasbro's successful revamp of the G.I. Joe line as a range of 3 3/4 inch figures, Palitoy began importing and modifying said toys as their own separate line, Action Force. No central "good guy" characters were introduced at first, but there was a central enemy force— the Red Shadows, led by the mysterious Baron Ironblood. The line was supported via stories in Battle! magazine, which quickly renamed itself to Battle Action Force. By 1985, Palitoy began winding down operations and Hasbro took over the Action Force property, with the Red Shadows becoming Cobra and a new, more G.I. Joe-based Action Force taking them on. Eventually, the G.I. Joe name and continuity completely supplanted the UK-original Action Force, though the Red Shadows and Baron Ironblood have popped up every so often in other Joe media.

In 1994, Hasbro (having acquired the remnants of Palitoy in 1991 with their merger with Kenner-Parker-Tonka) revived the Action Man line and redid it, turning him into a kind of Jack-of-All-Trades. With his new extra buff physique, Action Man was now a soldier, an athlete, a secret agent, and many other things with a brand new enemy named Dr. X. The line also began showing up on American shores for the first time.

In 1995, an animated series with live-action segments was released by DiC Entertainmentnote It wasn't the first time they've done such a show. where Action Man was part of a Global Defense team called Action Force (including Knuck, Natalie, Jock, and their dog Raid) but has complete amnesia and only tends to have minor flashes of memory at various times. The Action Force is often called upon to deal with the threat of a paramilitary organization lead by Dr. X.

In 2000, a CGI series (unrelated to the 1995 incarnation) was produced by Mainframe Entertainment for YTV and Fox Kids. It follows the adventures of Alex Mann, alias "Action Man," an extreme sports athlete who discovers he has something called the AMP Factor, which is an adrenaline triggered ability that lets him analyze any situation and mathematically determine the best course of action, represented by complex equations floating around in his head while time appears to stop. Alex maintains a friendly rivalry with fellow athlete Brandon Caine, who quietly resents always coming in second to Alex. The pair are approached by the mysterious Dr. X who offers to improve upon the two with cybernetic implants. Alex refuses but Brandon accepts. Soon an altered Brandon comes after Alex and Dr. X makes it clear that he wants the secret behind Alex's ability for himself. With the help of his former high school football coach Simon Grey (who is far more than he seems) and the rest of Team Extreme (Alex plus his camerawoman, manager, and pilot), the Action Man must stop Dr. X's plans for "the future of humanity" and try to save his friend while still maintaining his career as an extreme sports star.

There also exists a trilogy of CGI movies, which seem to follow a Broad Strokes version of the 1995 cartoon, but with visuals like that of the 2000 series (as they were all produced by Mainframe). As of 2012, Hasbro is developing an Action Man film,

but that project seems to have fallen into Development Hell. The French animated series Alpha Teens on Machines is derived from an Action Man replacement line, retaining more or less what could be reasonably called a different interpretation of the protagonist himself, but with a completely different set of characters (in some parts of the world, it was even called Action Man A.T.O.M).

2016 saw the launch of a new ongoing monthly comic from frequent Hasbro partner IDW Publishing; this has the premise of Action Man being a title used by many different people (a similar concept had been used in Hasbro's failed Unit: E attempt in 2011) in the service of the UK; the Free Comic Book Day issue (as a dual title with ROM (IDW)) has the previous Action Man performing a Heroic Sacrifice while stopping a plot by Dr. X, resulting in his sidekick, Ian Noble, taking up the mantle. It's a part of the new Shared Universe IDW's created for their Hasbro titles, starting with the crossover event Revolution; the series ended after 4 issues (due to poor sales), and Ian then became a member of the Revolutionaries.