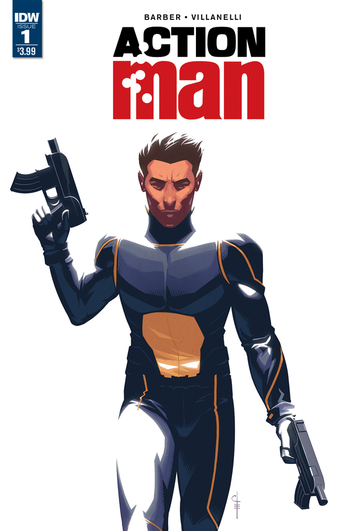 Meet Action Man, Britain's one-bloke answer to G.I. Joe. The latest of the Action Man program that's served the country since the reign of Elisabeth I, he's trained to the highest levels in all fields to operate in situations where a full team would be impractical: a master of fighting, communication, and disguise, a 10th level Judo black belt, a member of Mensa, and a three-star Michelin chef.

Now, Ian Noble — a young man and former member of Action Man's support team — has been selected to become the new Action Man, and must train to reach his full potential as Britain's hero while also pursuing clues against Doctor X, the villain responsible for the death of his predecessor.

Action Man is a 2016 comic book written by John Barber and published by IDW Publishing, released to tie into both IDW's Revolution event and the 50th anniversary of the Action Man toy, that reimagines the British hero as a James Bond-esque super spy to tie back to the character's military origins. Though taking on a Darker and Edgier tone than the TV shows that came before it, it still doesn't take itself too seriously: the first two issues involve Guernesey Independence terrorists, a German wearing powered armor who calls people "pillocks", and our hero crashing a train into Shepreth Wildlife Park

As a Hasbro licensed property, the comic is part of the Hasbro Comic Universe, and crossed over with the other series as part of Revolution. As a limited series, that means it ends at that point, too, after four issues and a Revolution one-shot. However, Action Man continued on as one of the main characters in the crossover title Revolutionaries, with Doctor X appearing as a villain.