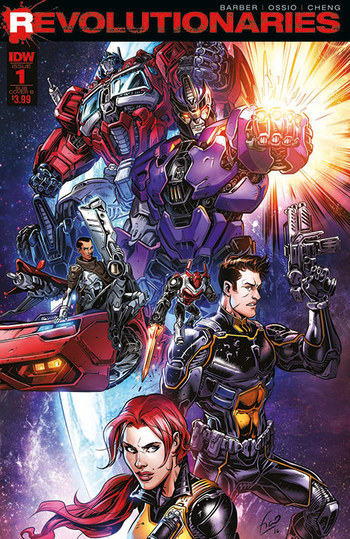 You say you want a revolution? note From top to bottom: Optimus Prime, Blackrock, Mayday, Acroyear, Action Man, the Thunderhawk, and Scarlett. Not pictured: Kup.
"So many factions, all fighting one another. There is much wrong with your world."
— Rom
Advertisement:

The planet Earth of the Hasbro Comic Universe has been touched by many outsiders, be they Cybertronian, Dire Wraith, Microspace or otherwise... and among these is the mysterious artifact known only as the Talisman. When the strange obelisk becomes active in the country of Schleteva, it brings together four unlikely allies: Mayday, a G.I. Joe leader with something to prove; Blackrock, a Cybertronian who thought he was a man; Kup, a Transformer older than the universe; and Action Man, a British special agent with big shoes to fill. As the four of them uncover the mysteries of the Talisman, the Revolutionaries will find strange allies and delve into the secrets of their world and the alien influence on its history.