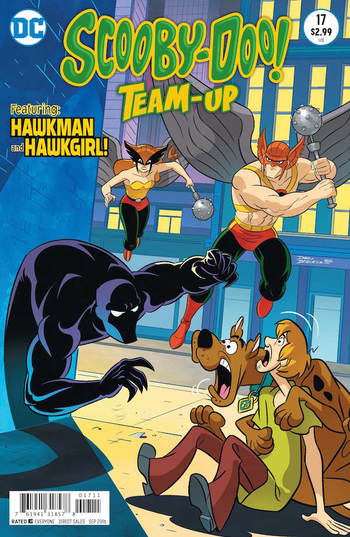 "Today, Scooby-Doo meets Hawkman and Hawkgirl!"
Alice Girl is so cool. Wouldn't it be great if she and Bob Man would team up? Even better — next month it could be The Amazing Charlie, the month after that Dandevil, then Elf Edna, then Fin Fang Fred, then Gertrude the Great....
Advertisement:

This is (usually but not always) an ongoing (as opposed to a Mini Series) Comic Book series built around the concept of two (sometimes more but usually just two) heroes teaming up - it usually has one main star which others team up with, but not always. Series where the main characters pretty much only team up with each other, like Superman/Batman and World's Finest (also a Superman/Batman team up) don't count. Also not for regularly teaming groups like The Avengers, Justice League, etc.

Subtrope of Crossover. Possibly related to Guest-Star Party Member. Also compare Limelight Series. See Story-Breaker Team-Up when one half of the team-up is massively stronger than the other.