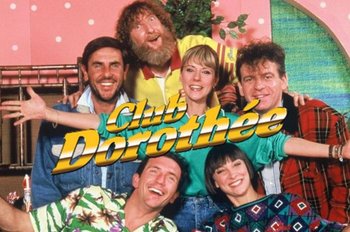 The Club Dorothée was a hugely popular French morning and afternoon kids show that, for many people of the generation that watched it, came to be fondly associated with The '90s, and remains a heavy hitter in many a French nostalgia-driven work or event about the era. It aired on the TF1 channel from 1987 to 1997.

It was essentially a variety show that combined games for children, edutainment, concerts, music videos, comedic skits and broadcasting of animated and live-action series, and was hosted by the eponymous Dorothée (stage name of Frédérique Hoschedé, born July 14th 1953), who built up a gigantic network of ancillary co-stars, music bands, gags, sets etc. She previously hosted some kids shows on Antenne 2 in The '80s with much success, but none was as big as this one would become. The show also launched the careers of quite a few French acting and show business personalities.

For better or worse, this show introduced France to a number of anime and tokusatsu series — French audiences got their first taste of Dragon Ball Z, Sailor Moon, Super Sentai and countless others there. Anime were already broadcast on French TV in The '80s, but not on such a massive scale. It did not go without some infamous Animation Age Ghetto controversies that involved a fair share of Cultural Posturing on the detractors' part, and the dubs and French songs left a lot to be desired, but undeniably contributed to shape France's modern appetite for anime and manga.

The show was a product of impresario Jean-Luc Azoulay's AB Productions. Azoulay (under the pseudonym "Jean-François Porry") was also the showrunner of AB Productions' numerous sitcoms/soap operas, a significant number of which were broadcast in the Club Dorothée, forming a Shared Universe of its own. He also contributed to the writing of the French opening songs of many of the Anime and Toku series in it.

The Club Dorothée ended when TF1 severed its association with Azoulay and AB Productions in some still unexplained circumstances in 1997, and also because its audience ratings started to dwindle due to increasingly competitive shows such as Les Minikeums on France 3. Nowadays, the show's legacy lives on in the IDF1 channel, co-founded and co-owned by Azoulay and available on the Télévision Numérique Terrestre broadcasting system.

, has uploaded hours of restored footage of the show, music clips, homages from people of that generation as well as some animes that have fallen into Public Domain.

Series that were broadcast in the original show (with their French titles):

The show itself:
Anime featured in the show: